The quick update I gave to my Kickstarter Family last night

We did it. We made it to Kamponde — and it only took three years!

Big, fat, sweaty hugs to all of you who helped to make it happen. And so much gratitude to Nick Davila (who shot the video and photos) Jim Mukenge and his gang (JC, Tonton and Chico), and the drivers and crew for making this this incredible journey possible. There is no way I could have done it without them — nor would I have wanted to.

I've been home now for six days and was hit hard with a bacterial gut infection that has taken two antibiotics to get me back on my feet. I wanted to check in and let you know that I haven't forgotten you — your postcards, trinkets and Kuba cloth await! — and I will begin to blog in detail this weekend about various aspects of the trip.

But I do want to share with you a few photos and videos to give you an idea of what our first day on the road between Kananga and Kamponde was like. In this one, the drivers map out the route in the dirt while the dumb white lady fiddles with her phone.

We had our lead 4x4 with Jim Mukenge and his crew, then a truck that followed with all our gear — spare tires, extra petrol, rice and beans, a generator, school supplies, water and luggage, etc. — and then two Congolese pastors in their own jeep who wanted to show me a new school that was under construction.

Here are some kids who greeted us in Dibatayi, a village about a third of the way to Kamponde. I went there with the Presbyterian pastors who are working with Build Congo Schools, an American organization that raises money to build schools and support educational programs in Congo. I had promised to stop by and see one of the new schools being built. The kids figured I was some Very Important Presbyterian Person (I am not) and had prepared this sweet song, which was then followed by speeches and gifts of two terrified pigeons, a piece of boa skin and a bottle of local honey.

The Old School, where kids sit on the ground: 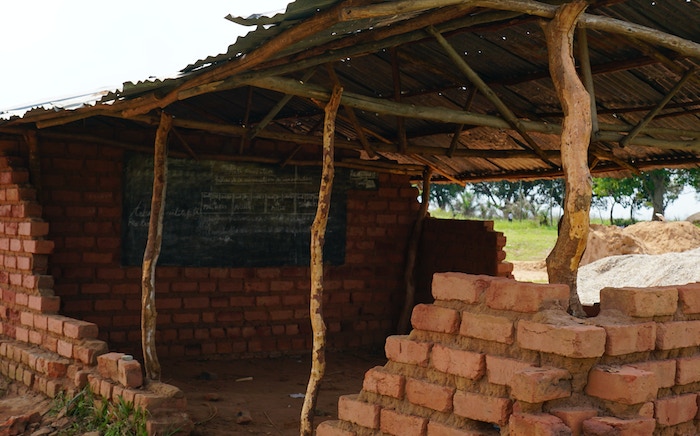 In the new school, the kids will have benches, desks and roof that will not force them to flee when it rains. They will no longer have to go to the forest to gather wood and raffia to patch up the school, often injuring themselves with machetes.

And then, back on the road.

Later that day, we had to get out and let the driver get the 4x4 through some sandy area without our weight. I look calm and composed, but it was about 95 degrees and 90% humidity and I was dripping in sweat & had to pee like mad (but wasn't about to make the guys wait around while I ran into the bush.)