A Holiday Tale: Catholic Nuns Getting It Done 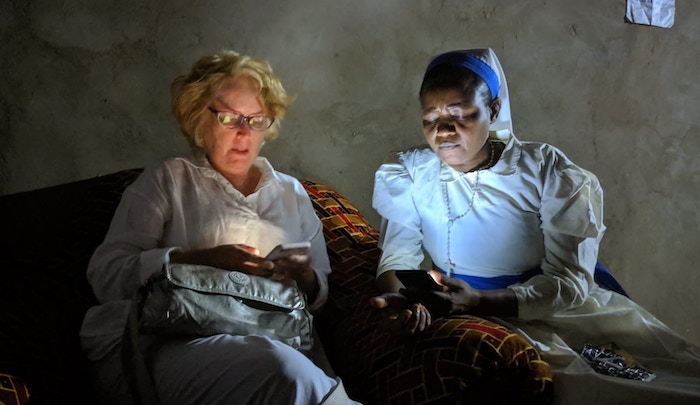 Beth and Sister Thèrése Looking Down at Their Phones Like All the World (Photo: Nick Davila)

When Christmas rolled around last week, perhaps some thought of Jesus or maybe the Pope, various elders and priests. All those men preaching from pulpits about being good Christians.

But I thought of Sisters Kapinga and Thèrése, two of the hundreds of thousands of Catholic nuns who work tirelessly behind the scenes and then sit quietly in the pews around the world.

These two sisters — each heading up the two competing Catholic orders in my former Peace Corps Village — are anything but quiet. They do more in one day than most of the village men accomplish in a week. That’s not to malign the men; most Congolese guys would readily admit they are too busy arguing over politics, drinking, and scheming about their next money-making ventures.

This Christmas, surrounded by family and friends — living my easy life with plenty of presents under my artificial tree, watching TV commercials with happy millennials gifting one another Pelotons or gas-guzzling SUVs — I wondered how the two sisters were celebrating the holiday back in the DRC.

My trip to Congo was filled with loads of tension and the suffocating PTSD among the people of Kasai Central who are coming out of three years of violent conflict, loss of family and displacement from homes. An estimated 5,000 people had been killed.

So these two sisters shared with me badly needed laughter and those traits I have always admired among the Congolese: They are playful, hopeful and oh-so resourceful.

Sister Thèrése is the usurper who came with her small flock from the order of Mother Mary of Perpetual Help to build and run a new primary school. Sister Kapinga is the headmistress of the old elementary school built back when the population was about half the 4,000 people that reside in and around the mission of Kamponde today. 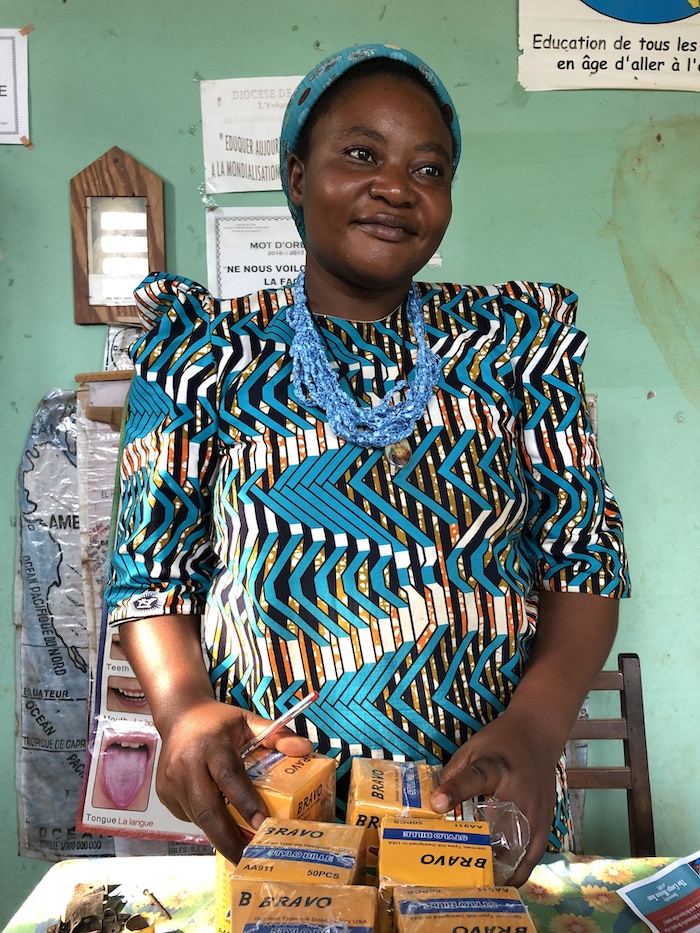 When I was a Peace Corps Volunteer, there was Père Paul, the lone holdout from the colonial Belgian Congo days. The Catholic nuns of the Immaculate Heart helped with the church and ran the medical clinic helping patients with a mysterious new virus not yet known as AIDS.

This same order of nuns still lives in an old house built by the Belgian missionaries and wears traditional Congolese batik dress and headdresses. They still run the village clinic and the primary school just up the road from the secondary school where I once taught.

Headmistress Kapinga runs the school with an iron fist, keeps the dirt-floor classrooms well-swept and was proud to show me that there were now separate latrines for the boys and girls and a trough that would soon have running water to promote good hygiene. 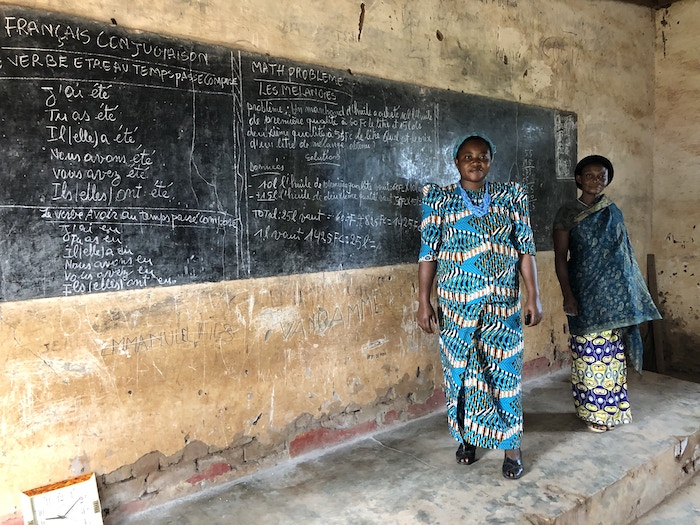 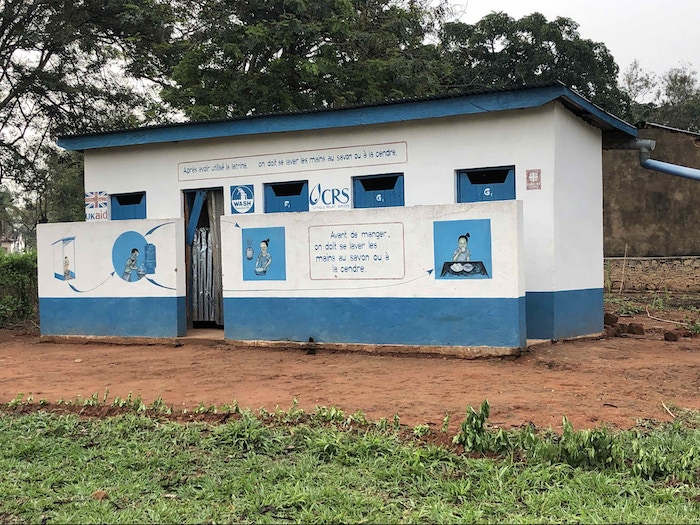 "We're not living in the past anymore, Madame Elizabeth,” she told me. “You see how much we have progressed?”

Indeed, though the school looked about the same as it had some 40 years ago and the classrooms were no better off — crumbling brick walls and dirt floors, no glass in the windows and pockmarked chalkboards — the pupils did look healthier than on my last visit in 2006. The cell tower and solar panels in the village square did lend an air of progress. I saw many barefoot kids in their blue-and-white school uniforms carrying around little cardboard replicas of cellphones, pointing them at me to take faux photos, nodding and smiling as if to say: I know that you know that it’s a fake, but the pretending is fun and hopeful all the same.

Sister Kapinga was delighted when I gifted her one of the brightly colored crocheted necklaces made by my American friend, 91-year-old Bobbie Dodson, an industrious church lady who lives near me and has raised more than $60,000 selling these necklaces to build schools in the DRC. She loved the story about these strangers raising money to help schools like hers.

But then Sister Thèrése found out. Her small order dresses in the more traditional white cotton habits with royal blue sashes and wimples. Thèrése learned I had toured the old primary school with Sister Kapinga and handed out hundreds of notebooks and pens donated by friends back in the States. I heard through the grapevine that she was miffed. Not to be outdone, she insisted that we come to dinner that night — and tour her newer school the next day. 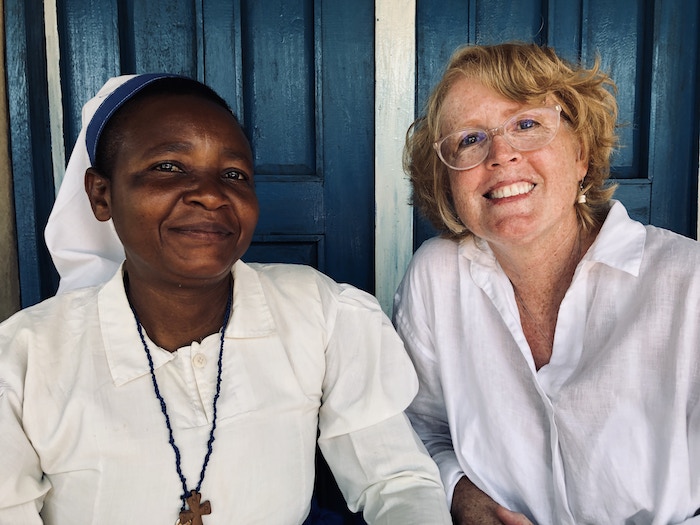 These sisters live in a new, adobe-style mud house with exposed rafters and a corrugated tin roof. It’s just across the road from the old Peace Corps house where a teacher and his family now live. We sat out on the concrete porch and drank fresh palm wine until the sun went down. Sister Thèrése pushed us to down more of the fermented sap while drinking hers out of a thimble-sized glass mug as cute as the colorful foil snowflakes that hang from their rafters.

When the heavy evening rains began, we retired to the dining room and were served a wonderful dinner: soup made with vegetables from the nuns’ own gardens, chicken from their own hen house, the gooey manioc dough known as fufu or bidia and yummy cassava leaves.

I knew that this new order of sisters had been robbed at gunpoint several weeks before we arrived, having had their cellphones and cash stolen. So I gave Sister Thèrése one of the androids I had brought from the States and we sat there in the soft light of solar-powered lanterns — remember there is no electricity in Kamponde — and I showed her how use some of the new apps on the phone. The hard rain was so loud on the tin roof, it was nearly impossible to talk so we mostly chuckled over the GIFs and emojis I shared with her.

We can now chat on WhatsApp; me from my stucco townhouse outside of San Francisco and Sister Thèrése from her tin-roofed convent in the Congo.

The next morning, Sister Thèrése led me around the compound, showing me the impressive new school, the working farm, the trenches she had helped to dig, ones that shouldered PVC piping that would soon carry potable water. I asked her who was behind this new water system and whether it was the same one that would soon supply water to the other primary school.

“Oh those sisters think the water will just magically appear, but we got our hands dirty to help dig those trenches,” she said, adding, to my surprise, that a Congolese engineer was building the first potable water system in the village since the Belgian missionaries ran the mission.

Sister Thèrése had this charming little tick of poking me in the ribs as we walked along and she whispered in my ear that the convent could sure use a new generator — poke poke — and a few more cellphones for the other sisters — poke poke — and an American benefactor who could send them textbooks and aid for the orphans she also took in after the uprising.

On our last morning, the ever-entrepreneurial sister slipped me a To Whom It May Concern letter to any Catholic Church in the United States asking for help with the orphans and school. I promised her that I would inquire; I’ll head to some local Catholic Churches and try to find them a patron, the way Bobbie and her fellow Presbyterians are helping to build schools in the Kasai. 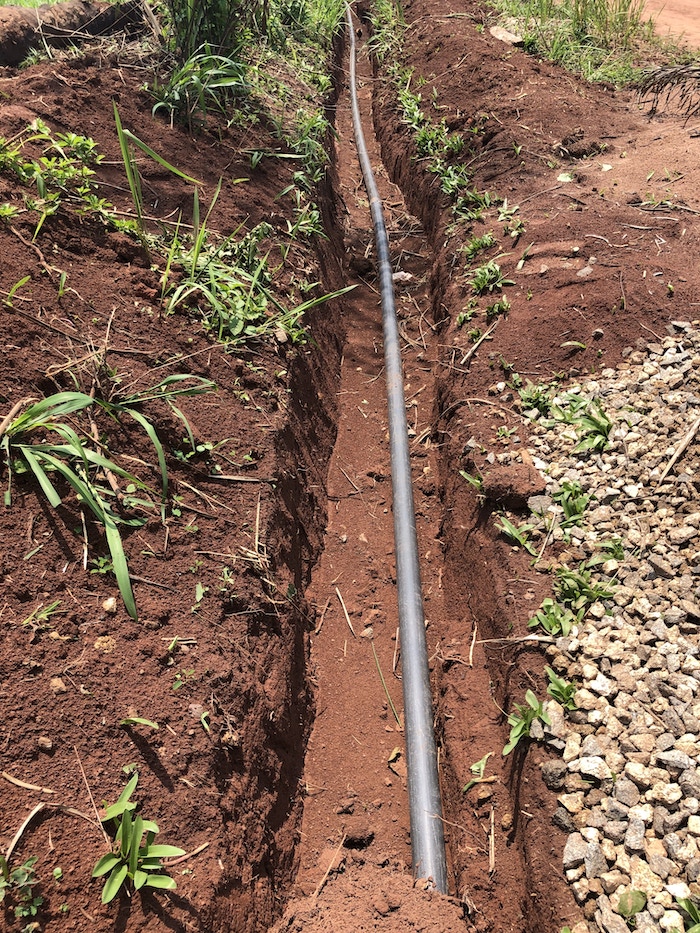 The PVC Pipe Just Waiting for Water To Flow

Later that morning she took me to meet the water engineer, Evariste Ilunga, who had an African Development Bank grant and was in the process of installing a system that would deliver drinking water to half dozen public fountains. The mamas would no longer have to walk a mile to the old source, carrying the heavy, sloshing buckets on their heads.

“We started to help dig the trenches for the pipes after the village men determined they would no longer work if they weren’t going to be paid,” Sister Thèrése told me as we walked toward the water tower and surveyed the trenches that ran along the main village paths. 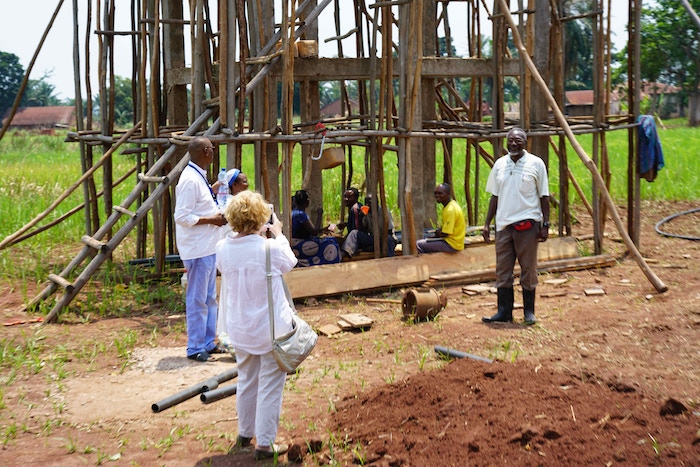 Ilunga — looking the part of engineer with his white beard, glasses and wellies — showed me the massive water tower under construction. The water pump would bring up safe groundwater to be delivered throughout the village via seven public taps and yet another one for the parish. He hoped the project would be finished by the end of the year.

I told him he was a hero. But Ilunga countered: “Not really, because I couldn’t get them interested. I told them, `The government financed this project, I executed the project — but what is your contribution to make it happen?’”

Alas, nothing. They refused to dig the trenches unless they got paid. But his grant was only enough to build the water tower and install the massive reservoir pump that was on its way.

In fact, Jim Mukenge — my friend who traveled with me to Kamponde and is a member of the provincial parliament so keeps up on projects such as this — recently told me the project is on hold because the workers were not getting paid.

Ilunga left, no doubt with his hands thrown up.

My Western mind says: Lordy, the village should band together and just get it done! Having safe drinking water flowing from village taps would be a huge boon to sanitation and sanity for all. In their minds, I suspect, they're saying: Why should I put in all the free work for a government that has done so little for me?

The morning that we were packing up to leave Kamponde, I had Jim’s security guys sneak over our own small generator to the new sisters, knowing they could use it to charge their one cellphone and perhaps rig it up to an old, tiny TV I saw on their living-room shelf.

I delivered a modest medical kit to the Immacuate Heart sisters who run the clinic.

I know that it’s now up to them and the thousands of sisters out there to just get it done.