Congo Visas and Tickets in Hand

Thank you dear Kickstarter Family for your patience and understanding. Things have calmed enough in the DRC, allowing me to get our third round of visas and tickets.

This is our third attempt and I hesitate to even give this update because in the past it has served as some sort of a cosmic jinx. But plans are now to leave on Sept. 5 for Kinshasa and then head to Kananga (the city north of Kamponde) as soon as we can get our documents to travel inland. Once in Kananga we'll do some volunteer work for the organization that sponsored our visas — Congo Helping Hands — get all our batteries charged up, and hire our jeep and driver.

Then there are Jim One and Jim Two: Jim Mukenge, who went with me to Kamponde in 2006 to help translate and will do so again; and James Diderich, who was in the Peace Corps with me and loved it so much he has made Kananga his home. Both have been instrumental in making this trip happen and we'll be bringing them plenty of chocolate.

Alas, when I say "we," I'm talking about my friend and filmmaker Nick Davila (who did the original Kickstarter video). There's still too much unrest and uncertainty to take Caitlin, who just graduated from college and has already secured a job and moved to LA! I bought a small projector that we can run off a petrol generator and intend to show some video to those mamas who believe they helped bring Caitlin into this world. It has of course dramatically changed the focus of my book — but that's real life at play.

There are still hundreds of thousands of refugees in the Kasai, many of them children, who fled their villages and lost their homes during the 2017 uprising in the region. How many of them are from my Peace Corps village remains to be seen. Since I have no communication with Kamponde, I truly do not know what to expect. I know the village was one of those attacked during the uprising — in which many schools and clinics were burned down — but the latest Google satellite images show that the school and the church are still there.

Here is a great OpEd by actor Ben Affleck, co-founder of the Eastern Congo Initiative, and Adam Hochschild, author of one of the great history books about Congo, "King Leopold's Ghost."

It got me thinking more about what small contribution I can make through my book.

"No territory on Earth has been plundered so long and severely as the land that is now the Democratic Republic of Congo," they write, giving a brief history of how the country has been victim to colonial and foreign powers. Not to diminish the internal strife and greed that has caused so much heartache and lost lives. But Americans have their now ugly history in the DRC — and few of us are aware.

"The seldom-acknowledged debt that the United States owes Congo is greatest for the period since 1960, when the country gained independence. Together with Belgium, the U.S. successfully plotted the assassination the next year of the first democratically chosen prime minister, Patrice Lumumba. Both Washington and Brussels saw him as too determined to make his country economically independent. Then, from his seizure of power in 1965 onward, the United States heavily supported the dictator Mobutu Sese Seko. By the time he was overthrown in 1997, Mobutu had bilked his country of even more money than King Leopold — helped by more than $1 billion in U.S. aid. Many of the troubled nation’s current problems have their roots in Mobutu’s 32 years of kleptocracy."

"Knowing that background, it’s encouraging today to find Americans involved with Congo in far more constructive ways. A few weeks ago, for instance, the two of us visited a coffee farm on an island in Lake Kivu. The prized Arabica strain of coffee has long been grown in the fertile highlands of East Africa, but Congolese production had fallen dramatically due to plant disease and two decades of intermittent warfare. However, on this particular land, owned by families who have lived on the island for generations, coffee is back. While supplies last, you may be able to find it at your local Starbucks."

I hope to find and tell similar stories through my work in DRC and so appreciate that you are coming along for the ride. 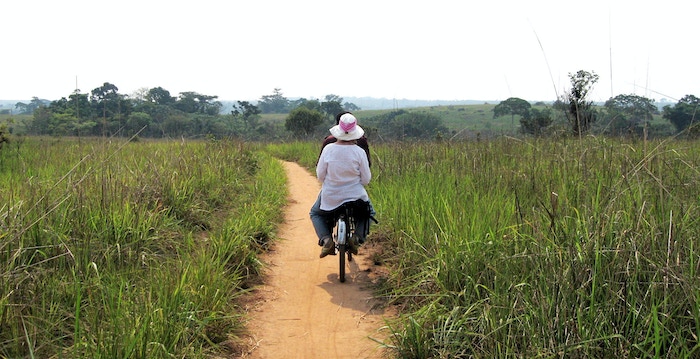 Taking a bike ride to visit Tshinyama in the next village over. (Photo: Kananga Mutond 2016)
9 views0 comments